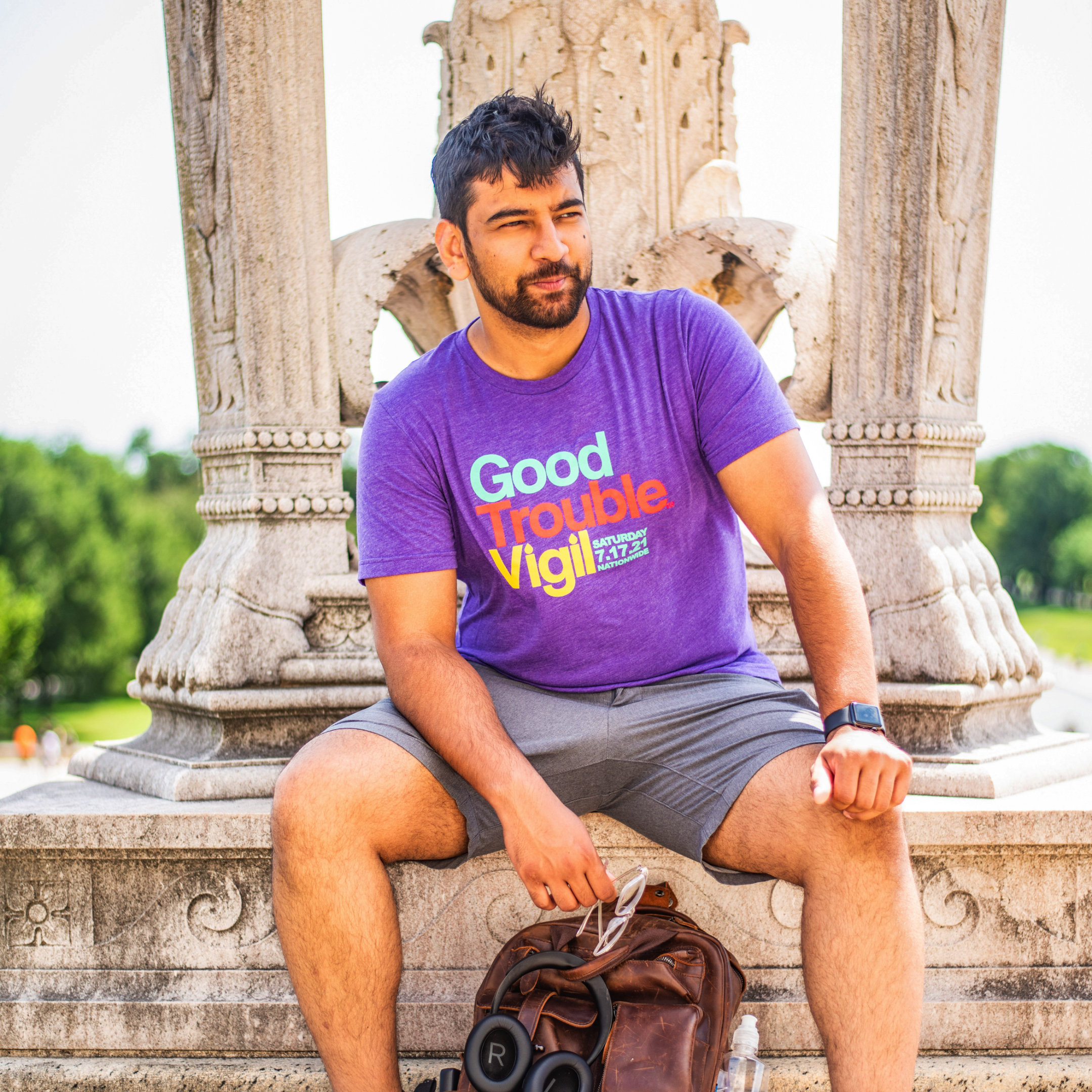 I build a campaign’s brand into a movement.

I’ve been fascinated all my life with symbols, the stories they tell, and the actions they inspire. After the disastrous election of Donald Trump in 2016, my fascination was turned into action. I quickly became, to my knowledge, the only specialist of my kind in Democratic politics.

In Democratic politics, there are quite a few people who have a good sense for what kind of content works towards a campaign’s goals. A far smaller group can actually create those things. I do both, with top-tier proficiency. This has significant advantages for the campaigns I work with:

A visual brand — especially a political one — is such a nuanced, fragile, and meaningful thing that often it is damaged in the repeated handoff between planner and doer. I am one person, with one mind, and have been able to maintain brand integrity to the finest details for my client campaigns time and time again.

I eliminate the gap between content strategizing and content making, meaning that there is significantly less time between planning and execution. Additionally, I am an extremely efficient designer, regularly surprising my colleagues in design with the sheer speed with which I create finished works of high quality.

At last calculation, I am able to save my client campaigns between 75-90% on design expenses, based on standard agency costs for services performed.

I will let my work speak for itself below. 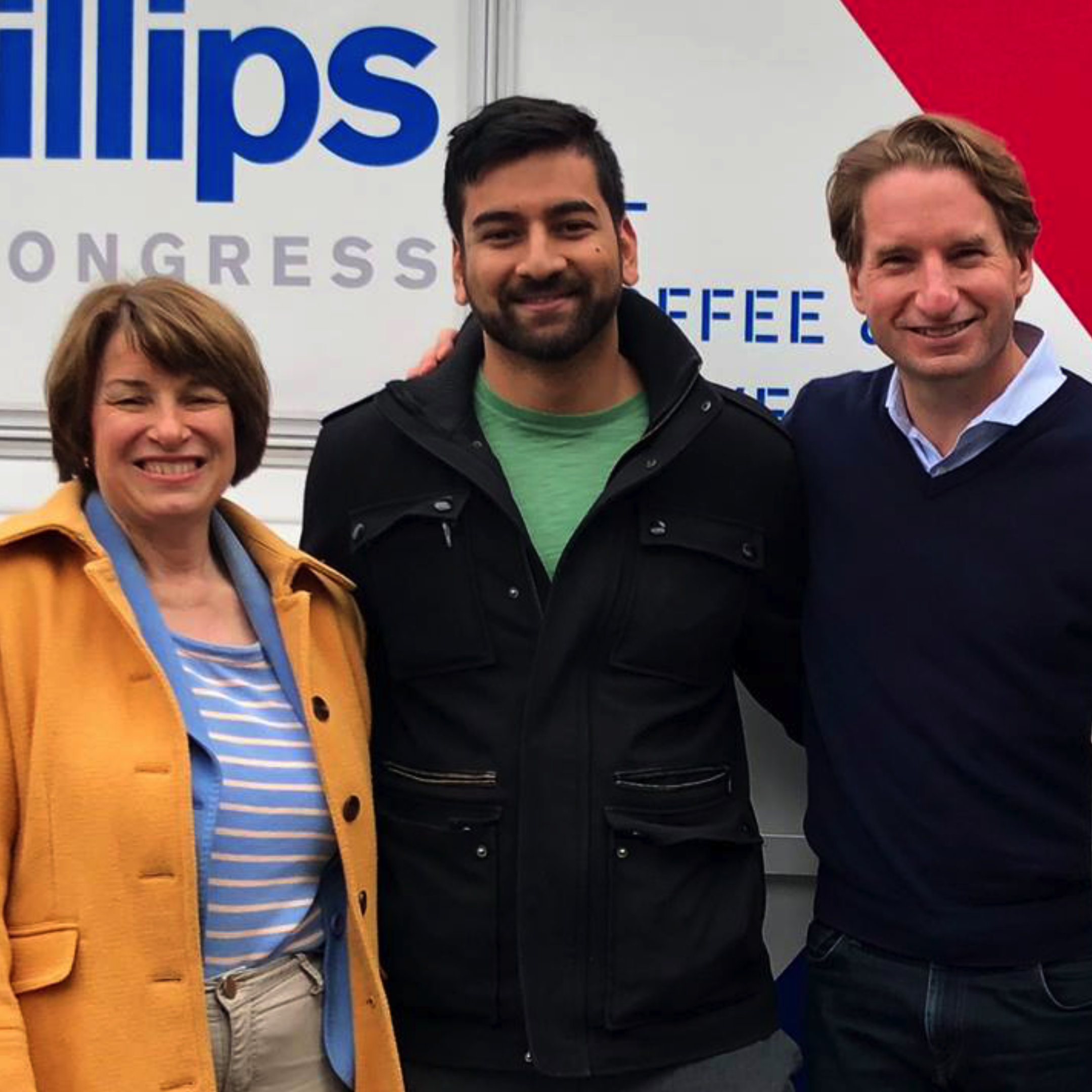 Here are three campaigns whose visual identities I helped turn into major movements. 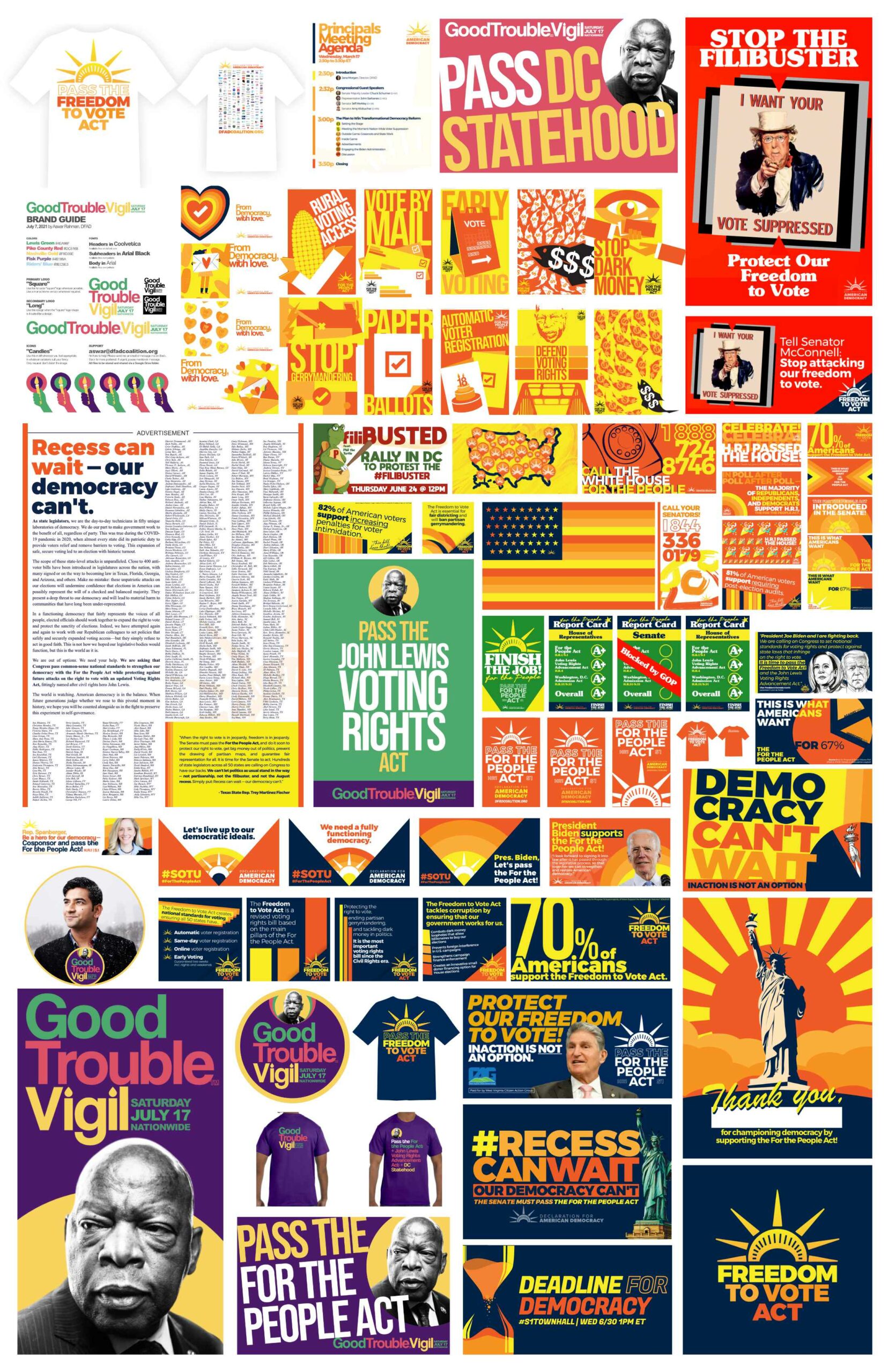 The Freedom to Vote Act

The Declaration for American Democracy coalition — now numbering over 230 member organizations — realized the importance of brand building early on. In early 2019, they hired me on as their Digital Content Creator. Within a matter of months, I had taken their logo and color palette and turned it into one of the most recognizable brands in the pro-democracy space.

The DFAD coalition has become the leading voice in the pro-democracy movement, being the main organizers behind the push to pass the Freedom to Vote Act. 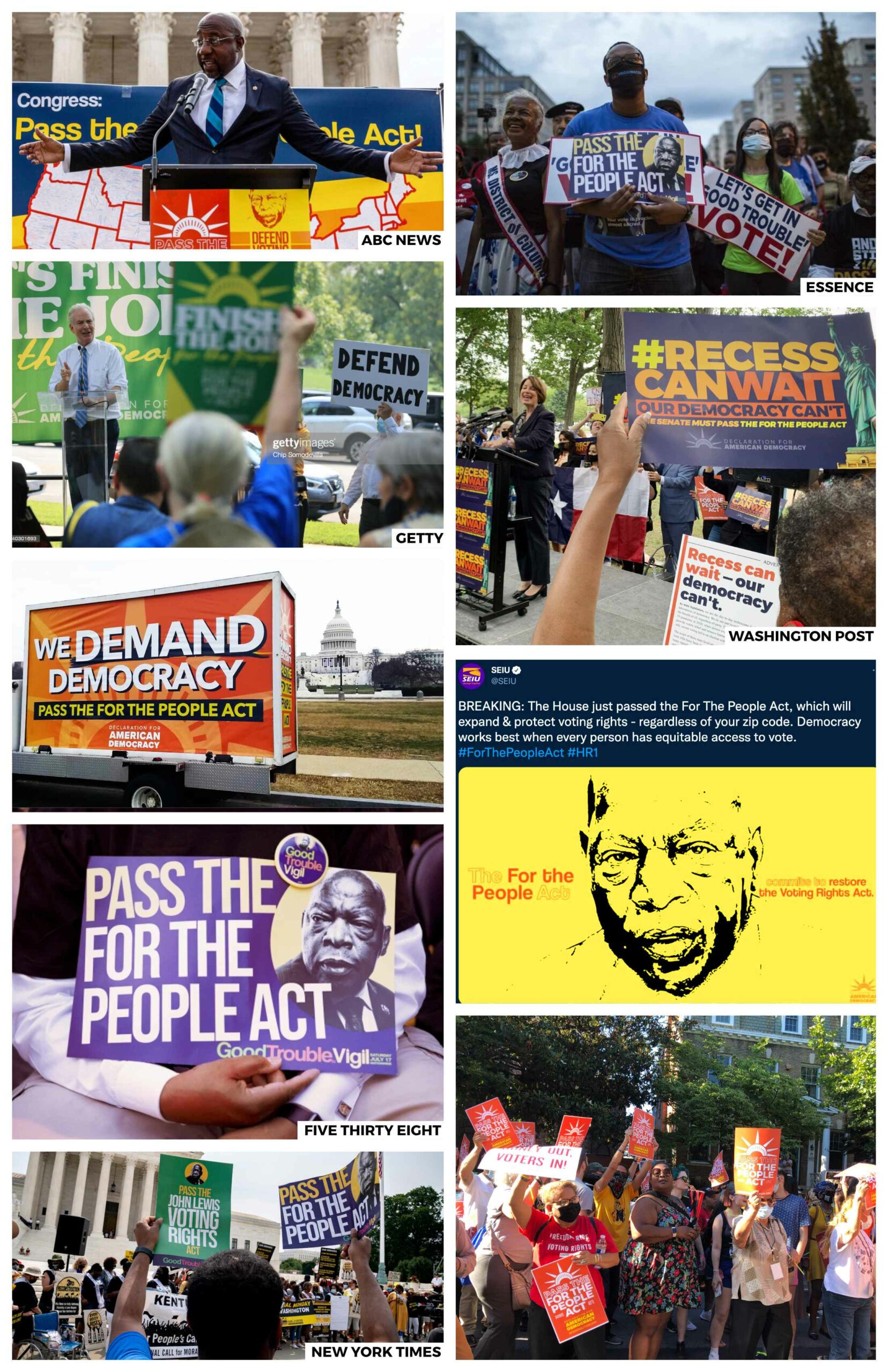 When I joined Senator Klobuchar’s campaign for President, it was a small operation just starting out against quite a few bigger campaigns — and it was the perfect training ground in national brand building. Having only received the campaign’s logo, I quickly developed a brand guide that would become the standard in every state, at every level of operation.

As the campaign’s lead on both content creation and social media, I had my finger on the pulse of our digital outreach, which helped me strategize and create the content that nearly doubled Senator Klobuchar’s online presence, and helped propel an underdog campaign far into the primaries, before a strategic endorsement of future President Biden. 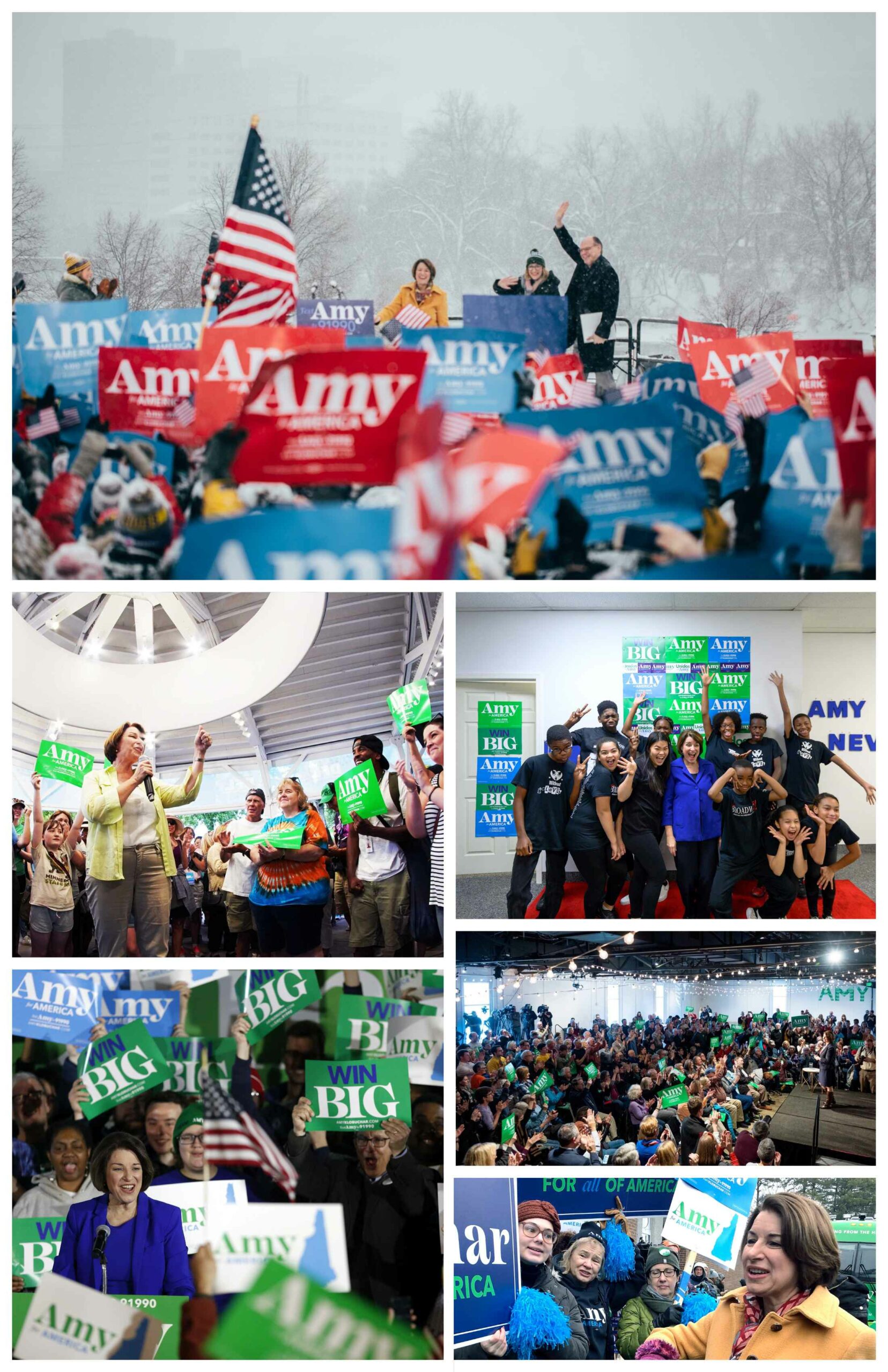 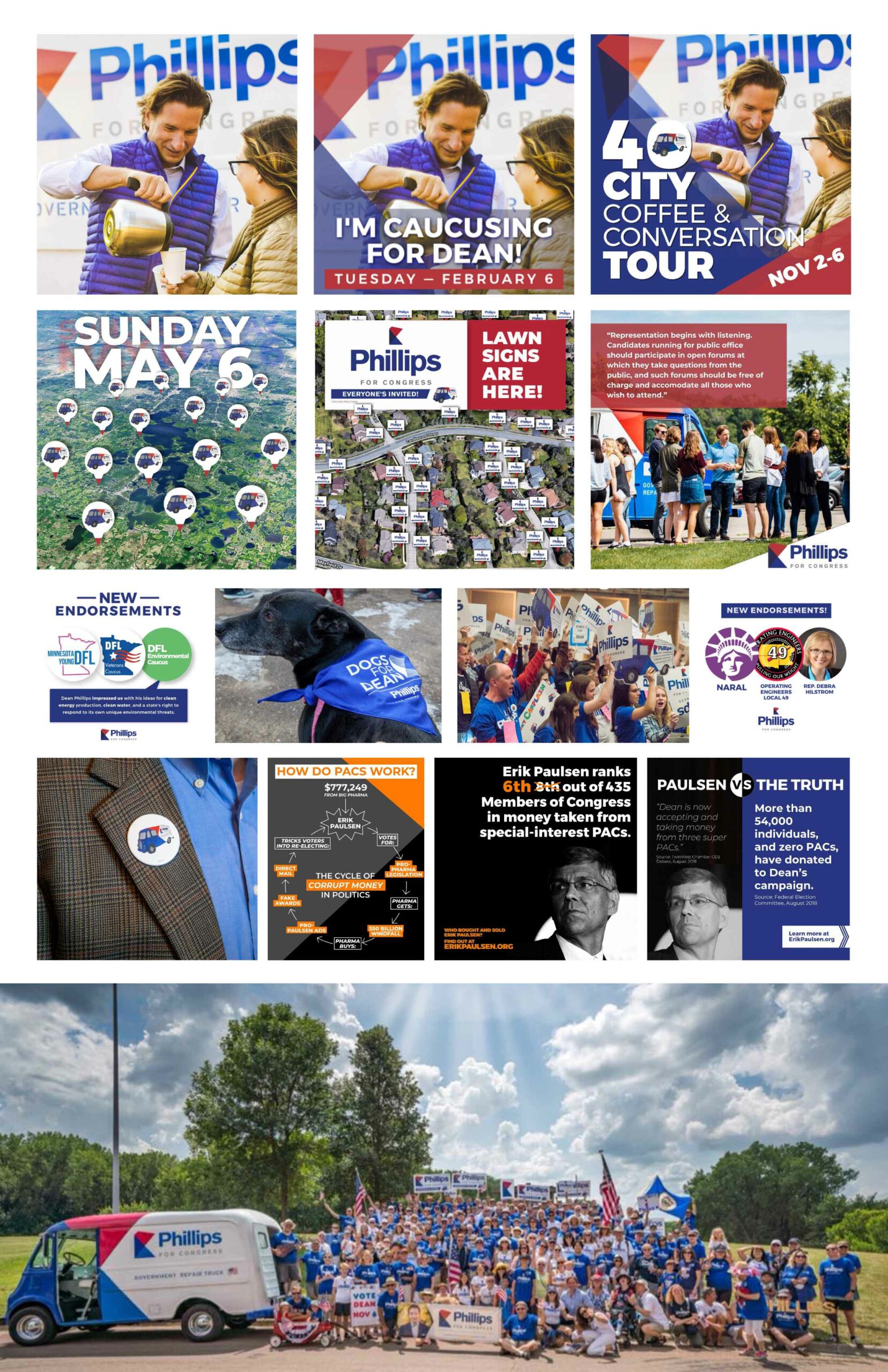 Dean Phillips’ successful run for the US House of Representatives in Minnesota’s Third Congressional District was a content maker’s dream. The campaign knew just how much of a fight they had on their hands. Their opponent was a ten-year incumbent, entrenched in the inner workings of the GOP, running in a district that hadn’t voted a Democrat into office since the Korean War.

Under stellar campaign leadership, the Phillips for Congress team created a well-oiled machine that allowed the room needed for personal creativity. I made use of every opportunity and outclassed the opposition’s digital campaign so strongly that pundits pointed to it as a major factor in the eventual win.

I keep busy, working with several clients towards a better democracy. These organizations range from Ivy League institutions to regional social nonprofits to local and state-level campaigns. 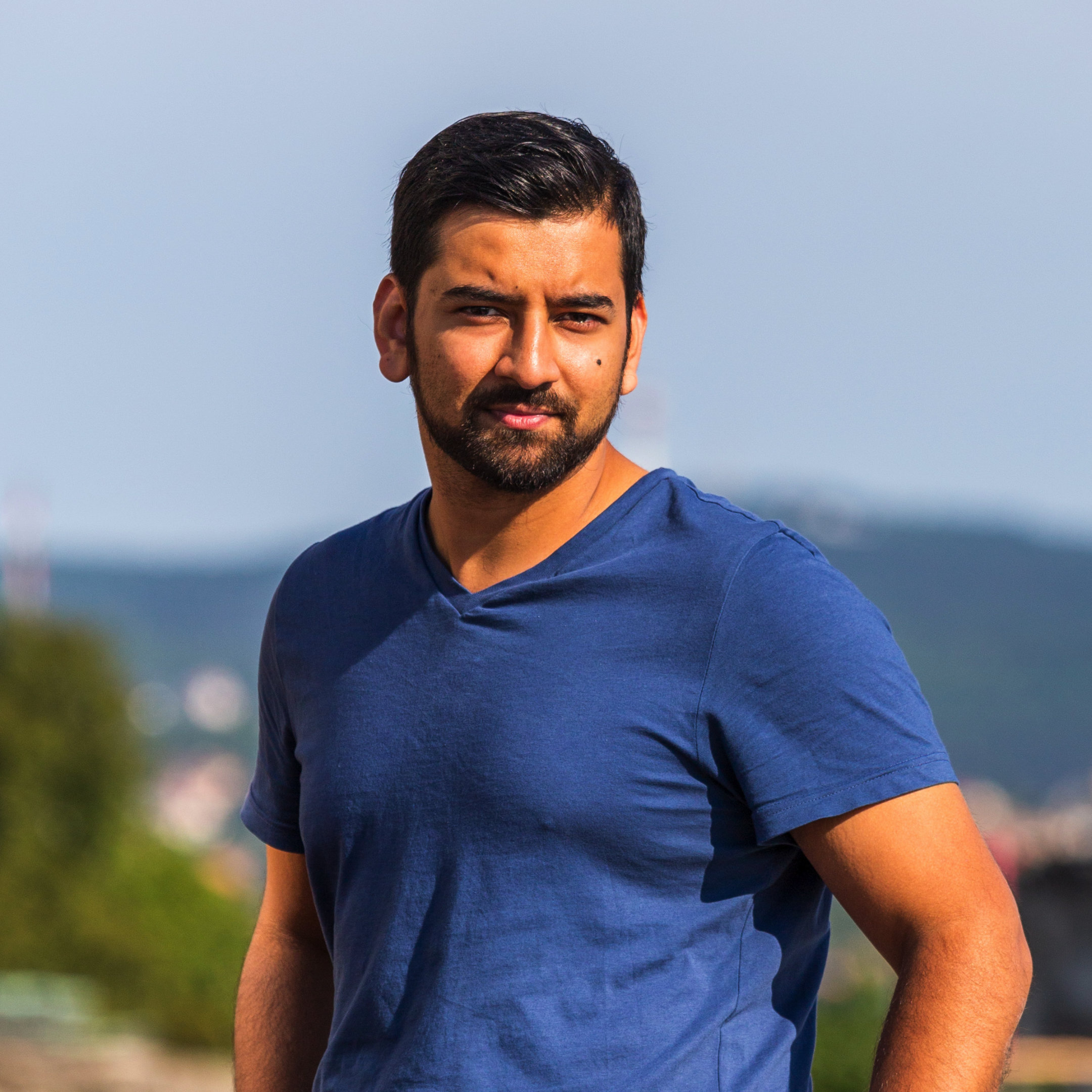 Your campaign can and must absolutely dominate the opposition in all things content, design, and digital. I’m here to help do that. From November 2021 to November 2022, I will be partnering with a small number of Congressional campaigns in important districts.

The integrity of the campaign’s visual brand will be my top priority. As the strength of the visual brand is the basis of trust and effective mass communication, it is uncompromisable. In practice, this will mean that I will be a checkpoint for all visual communication materials, as directed by campaign leadership.

I will be the campaign’s chief graphic designer, creating materials in conjunction with campaign staff and independently.

I will handle the baseline content for the campaign’s social media channels, including conceptualizing, drafting, and scheduling for posting upon approval. Note: This does not include rapid response, meaning that a campaign staff member will also have to have ownership of the channels for any emergencies.

For a standard congressional campaign, my rate is $5,000 per month, with a win bonus of two months’ equivalent. Contracts are divided into six month durations. For campaigns with smaller budgets or greater needs, different payment arrangements can be discussed. Deferred payment methods and partial in-kind services can also be arranged for campaigns in key districts facing unique circumstances.

Use this form below and I will write back to you within one business day to set up a video call.